Top 3 Ways to Kill a Relationship 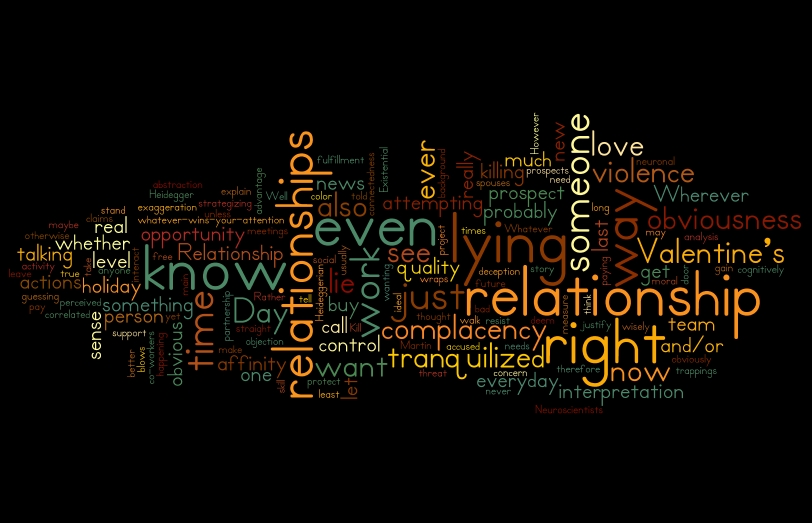 “Existential analysis has the character of doing violence, whether to the claims of the everyday interpretation, or to its complacency and its tranquilized obviousness.” -Martin Heidegger

February is upon us, which means for most of us that we have been immersed in and surrounded by Valentine’s Day and all its trappings. This has been a time for many to buy cards, flowers, candy, dinner, and so on, while others resist and condemn various qualities of the holiday and even the holiday itself.

Either way, I’m guessing that no matter which group you’re in, your attitude and actions around Valentine’s Day are the same as they were last year. I bet that you could explain the background and reasons for your position, maybe even relate a compelling story of heartbreak and disappointment, or of true love and serendipity.

I dare you to risk everything, and file all of that under “everyday interpretation” and “tranquilized obviousness.”

Today, let’s do some Heideggerian violence to what seems so obvious. Rather than explore an abstraction, stand or ideal, let’s reveal what’s probably already happening now. In all our “complacency” we are probably, right now, killing off our relationships, and therefore our possibilities, opportunities and fulfillment.

How do we do such things? Well, I can tell you how I do it, and how thousands of people I’ve had the opportunity to coach, support and intimately interact with do it. If you have a willingness to be authentic, and a sense of humor, I think you’ll see yourself here as well. If not, you may want pass this by for now…

The Top 3 Ways to Kill a Relationship (in Business and Life):

1.   Leave/ Check Out. This is really obvious, right? The simplest way to end/kill a relationship is to leave. However, this also has to do with not really being there, even when you are physically there. Let’s face it: in a romantic relationship, you’ve usually mentally and/or emotionally checked out long before you actually walk out the door, right? Or how about those times on a sales call where, while the prospect was talking, you were silently planning how to “overcome his objection”? Or those team meetings where you pretend to be paying attention to someone while doing whatever-wins-your-attention on your smart phone? Here’s the news: they know when you’re doing that! Even below the level of conscious thought, they know! Neuroscientists have discovered “mirror neurons” that, before conceptual representation in language and even before sensory perception, detect, match, and reflect the neuronal activity of the person we’re engaged with! Ever get the feeling you’re not being listened to, even when it looks like you are? That’s exactly what I’m talking about! They know! A prospect won’t call you out on it, and they might not even cognitively understand it, but they also won’t buy. Or want to see you again.

2.   Lie. Is there anything more that needs to be said? Yes. Let’s pay tribute at least to the reliability of the lie. I mean, doesn’t lying always end up how we know it will? With more lying, right? Whatever your justification, lying doesn’t work in relationships. In a very real sense, deception could be said to be the opposite of relationship, in that what’s being related to is a façade. We can justify it with “We all know that we have to lie sometimes” (complete with agreed-on scales of size and color to measure moral significance), with “I’m doing it to protect them,” with “It’s for their own good,” or with “It’s just not the right time yet.” And we have to lie because of how they are, right? Right? And of course, when it all blows up in our faces, it’s because they found out, or because you told the truth at last, one time – next time, you won’t make that mistake… Wherever you’ve justified lying to someone, you’ve doubled your production because you’re also lying to yourself. By the way – withholding/intentional omission, exaggeration, etc., is all lying.

3.       Dominate/Control. Has anyone ever accused you of never calling unless you need something? Have you ever called someone without wanting something? Relationship is by its very nature a shared, social phenomenon… but why let that stop you from having the relationship be all about you? You’d better keep that relevant information or special skill under wraps so that your co-workers can’t take advantage of you! Better let your team know how much you want this project to happen and how much you’ll appreciate their work, because obviously their primary concern and main motivation should be pleasing you. Wherever you are strategizing, manipulating, or otherwise attempting to control a relationship or person, you are killing that relationship. Have you ever felt real connectedness and affinity while attempting to control someone? No. They just don’t co-exist. You can only have one.

Here’s the bad news: whether these actions arise out of fear, as a reaction to some perceived threat, and/or just being unconscious, relationships just don’t work that way. Love doesn’t work that way. From love and a wish to do violence, I invite you to see these behaviors for what they are – and to then, free yourself from “complacency and its tranquilized obviousness”; choose wisely.

Our performance and quality of life are inextricably connected with and correlated to the quality of our relationships; be they with customers, associates, prospects, family, friends, or spouses. When we get straight about the selfish, ignorant and counter-productive ways of being we commonly bring to them, we have the opportunity to gain crucial insight and then create a whole new level of love, affinity, and partnership in those relationships we deem most important; and then, a new future is born.